This little game was coded for an April's Fools event.
It's a short choose-your-own-adventure style game, where following the classic sci-fi tropes can get you killed.

Follow the adventures of a xenobiologist on a quest to find a rare alien specimen.

This version improves on the original release by adding checkpoints and a couple grammar fixes.

I think this game has the most ports out of all Metroid fan games so far.

After the original AMTAv1.0 was released, the story was extracted to an XML file and a few spelling errors were fixed. This XML file was converted to a Windows batch script, as well as a playable static HTML page. A custom telnet server exists which serves the game over standard telnet as well as TN3270. These things were posted on the old AM2R forums.

Later, the game was ported to PDP-11/03 (a minicomputer from the late 70s), and together with a PDP-11 emulator, it was even ported to GameCube (Reddit post). This port fixes most of the spelling / grammar errors, improves a few button texts, has an improved text layout, and it might serve as inspiration for future updates, since it literally runs on (emulated) late 70s / early 80s hardware.

My English far from ideal, but i think i found a bug *spoiler alert* ?

The story isn't to be taken seriously. :-)
If we don't examine the ship, we can assume the protagonist already got their gear on the way out. It's the typical situation where no matter what we choose, the story will unravel the same way, even with all the illusion of choice we have.

Thank you for playing! 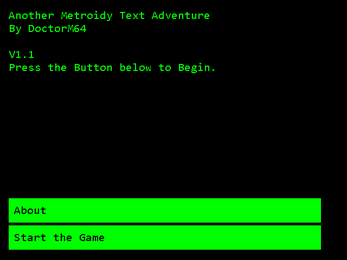 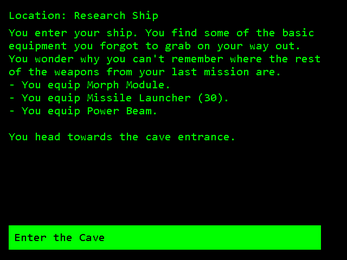 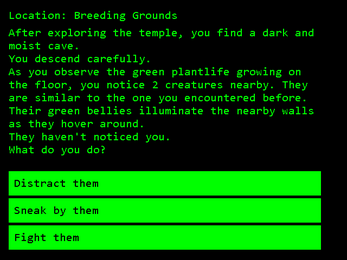